Hurricane Harvey has rearranged our meeting place. We will be meeting in member homes for the future.

January -Meeting will be at Mimi Baugh's home

April - a field trip to The Herb Cottage in Halletsville. 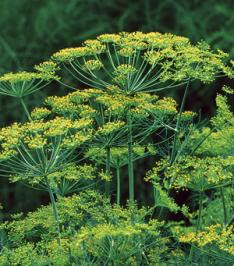 Every year the International Herb Association names an herb of the year. This year’s herb is Dill Anethum graveolens which belongs to the family Apiaceae, formerly called Umbelliferae. It is both a spice and an herb, and recipes will specify the “spice dill seed” when calling for the seed or the “herb dill weed or dill” when calling for the leaf.

Dill is an annual that is native to the Mediterranean region. The name dill is from the old Norse word, dilla (to lull) which pertains to its soothing properties. It has long been used as both a culinary herb and a medicinal herb. Records show that it was used medicinally over 5,000 years ago in Egypt. The ancient Greeks believed that dill cured hiccups. In the Middle Ages, dill was one of the herbs used by magicians to cast love potions and was used to ward off witches’ spells. In Germany and Belgium, brides would attach a sprig of dill to their wedding gowns or would carry dill sprigs in their bouquets in the hopes for a happy and blessed marriage. Early American settlers called dill seed "meetinghouse seed" because both adults and children chewed them to be quiet and to stave off the boredom and hunger of long sessions in church or town meetings.

Dill is aromatic, feathery and has fernlike plumes. It is grown as a cool weather herb in south Texas and should be planted in the fall. It prefers full sun although it can be grown in partial shade in Texas, providing that it has good drainage. It grows best in medium-rich, neutral to somewhat acidic soil and needs plenty of water. Plant it every two weeks or so for continuous dill. Depending on the cultivar, dill can grow from 2’ to 5’ tall. Some of the dill cultivars are as follows:

“Bouquet” is compact, making it ideal for container growing and one of the most widely grown cultivars of dill. It is a dark blue-green color, which blossoms early with large seed heads, has good foliage for pickling, can grow from 30” to 40” tall and is very aromatic.

“Dukat” has more foliage that is greener and lasts longer on the plant than other dills. It is mild, sweet, and never bitter or overly strong, has small yellow flowers in a 6” wide upside down umbrella shaped flower cluster and grows from 36” to 48” tall.

“Superdukat” is an improved variety of Dukat with high essential oil content. The flower heads are uniform in height and the plant is straight and clean for easier harvesting and flowers later than Bouquet dill. It grows to about 24” tall.

“Fernleaf” is a draft cultivar with fine foliage and idea for container growing getting about 18” to 24” tall. It has dark green leaves and is said to be slower to bolt than some of the other cultivars.

“Mammoth” is a vigorous grower which can grow up to 3’ to 5’, and it bolts quickly and is considered best for pickling.

“Long Island Mammoth” is a tall variety and is used for pickling and grows to about 30” tall.

Some other cultivars are “Delikat”, “Green Sleeves”, “Hercules”, “Monia”, “Tetra Leaf” and “Vierling”.

The flowers can be pinched off for higher leaf production. To harvest, pick the leaves as the flowers begin to open, and collect seeds when they are green for salads, or let the seeds ripen on the plant to use for drying or planting. Dill is self-sowing, so when the heat of summer arrives and causes it to bolt, just let it go, and come fall when the temperature starts to cool, lots of little baby dill weed plants will be seen.

Basil and dill planted near your tomato plants will help keep tomato hornworms away and encourage your tomatoes to grow steadily. Dill improves the growth and health of cabbage, onions, lettuce and cucumbers, but keep it away from carrots.

Do not plant dill and fennel near each other because they can and will cross pollinate. We found this to be true in our Master Gardener demonstration gardens when our dill and fennel cross pollinated! According to the Encyclopedia of Herbs and Their Uses by Deni Bown, page 386, she states the following: Closely related genera may also interbreed if they are grown together and flower at the same time; dill and fennel are known to cross, resulting in plants that are indeterminate in flavor.

The best time for harvesting dill is in the early morning because the higher moisture content of the plants at this time results in better flavor. If you want a continuous supply of dill, do not let your plants bolt by keeping their tops trimmed regularly. Dill weed is best harvested before the plant is fully mature and before the flower buds have opened. Dill seed is harvested at the end of the plant’s life cycle. The flowers will be spent, the stems will start drying out, and the seeds will have turned a golden brown color.

To collect dill seed allow the seeds to turn pale brown in order to collect them and dry them for culinary or sowing purposes. Cut the tops from the plants with about a foot or so of the stalk intact and hang upside down over a screen or with the umbels in paper bags to catch the seeds. When dry, store in dark glass jars.

Another method involves laying the freshly harvested seed heads on a cookie sheet and then placing them in the freezer. Remove the frozen seed heads after a few days and rub the seed heads between your hands over a piece of paper to harvest.

Fresh cut dill can be stored in the refrigerator for two to three days. Place the stems in a cup of water to help keep the leaves fresh. Fresh dill is preferred over dried dill because of its superior flavor. However, there are several methods for preparing dill weed for long term storage. To dry naturally, lay freshly harvested dill on waxed paper or a paper towel and place in a frost-free refrigerator. Dill weed can also be dried in a food dehydrator or frozen and placed in plastic bags for later use.

Dill has long been used as a culinary herb and a medicinal herb. It is one of the carminative herbs which soothe the digestive tract because of its antiflatulent power. Records show that it was used medicinally over 5,000 years ago in Egypt. It has long been used as a tea to calm colicky infants, calm upset stomachs, aids in digestion, promotes sleep and reduces nervousness. To freshen one’s breath and aid in digestion, chew a few dill seeds or drink a cup of dill tea (1 to 2 teaspoons of leaves for each cup of boiling water). Dill is a diuretic and also helps to tonify the liver and pancreas. It has been used to increase milk flow in nursing mothers and to ease menstrual pain. Dill is also very rich in manganese, iron, magnesium, vitamin C and flavanoids. The seeds contain so much calcium that 1 tablespoon contains 100 milligrams which is more than in 1/3 cup of milk.

We all know about the wonderful flavor of dill pickles. However, both the dill leaves and dill seeds can tantalize the culinary senses when used in just about any dish including salads, soups, sauces, meats (especially fish and sea food), egg dishes, vegetables (especially potatoes), breads, butters, vinegars and oils. And if you really want to perk up an omelet, put a little dill in the egg mixture. Add the chopped leaves to cold sour cream for a dip or add as a garnish for mild cheeses. To preserve its flavor, add dill leaves at the last minute of cooking to sauces or vegetables or dill can be added at the beginning of cooking and right before serving. Fresh dill is much more aromatic than the dried one.

Dill is often made into an essential oil which is used in soaps, perfumes, detergents, creams and lotions.

Toss spinach, green onions, almonds, strawberries and dill in a salad bowl and just before serving pour dressing over salad and toss.
Posted by Herbie at 11:07 AM